So we are in the period of waiting around for the big operation, kicking our heels. Peanut though had filled the gap by raising money for Cancer Research UK by doing a Sky Dive. Finally her Big Day arrived.

Saturday May 7th 2011. We had travelled across to Bicester the night before and stayed with the Elf and Driverman as they are just five minutes away from RAF Weston where Peanut  and Driverman were doing the sky jump. After weeks of lovely weather we awoke to skies thick with cloud and heavy rain and our hearts were as gloomy as the skies, as we doubted if the sky jump would even go ahead.

Nonetheless, 8 am saw us sat in the mess at RAF Weston drinking coffee and eating bacon butties.  Well that isn't quite true! I was eating a bacon butty - Peanut and Driverman didn't fancy one for some reason! They had checked in and we were advised that we would just have to hang around and wait for a break in the weather. StarGirl and Dealmaker joined us to watch the fun too, which helped make the waiting pass quicker!

After about an hour a briefing was held for the skyjumpers - about a dozen in total - where a few safety issues were highlighted and  what the jumpers had to do during the jump and upon landing was discussed.  I thought they would all be jumping off steps to practice landing safely but there was none of that. Then it was back to the mess for more coffee and hanging around while the Heavens opened.  By now of course this was all pure Biggles in my mind and we were all waiting around in the mess ready to be scrambled into action to see off the Bosch! In truth, in an odd way, the waiting around added to the fun by building up the excitement. 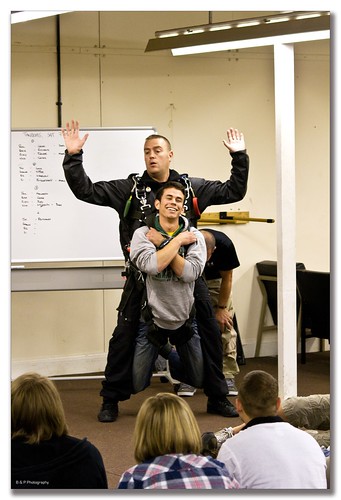 A cloud moved from in front of another to reveal a tiny gap and a sliver of blue sky. The rain stopped and it began to look promising. Then the jumpers were called to the hangar to kit up.  As we walked across, I saw the plane looking mean and cool in black with orange stripes. That would be a good colour combination on a MINI I thought...

Driverman was kitted in a very sporting modern jumpsuit which suited him well, while Peanut's attire was more conventional and matched her very Biggles like parachute helmet. As soon as Peanut had her helmet on she turned to me, smiled and looked about ten years old. My heart melted and I thought, "Golly" (or something like that) "is she really going to jump out of a plane from 13,000 feet?" 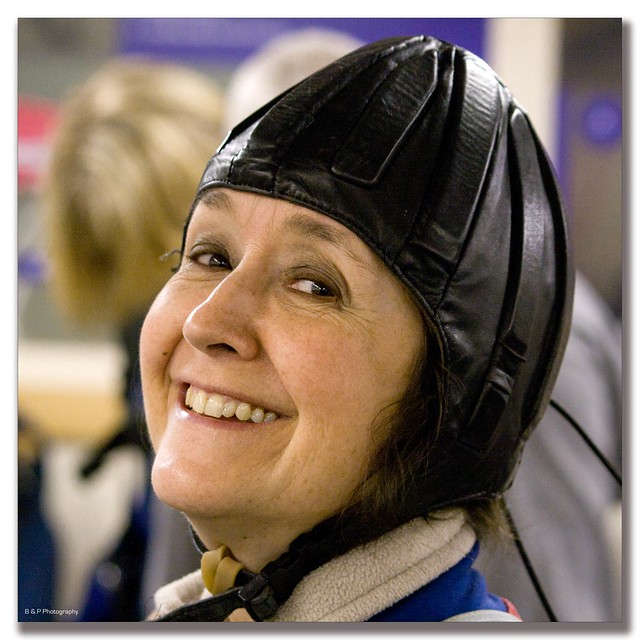 There were a few  flights as only four jumpers could fit on the plane at once. Peanut and Driverman were jumpers three and four on the first plane and before long we were watching them take off. Their jumps were being videod and they both had a personal photographer who would jump with them  and film them on the way down. At the briefing, it was mentioned that this was a good thing to do as with all the excitement and adrenalin it would all be over so fast that some bits they would not even remember! Sounded logical to us, so we booked the photographer. I thought of all my pals who were keen photographers and many of them would love to make a living out of photography and I thought, "Yep, jumping out of aeroplanes to film sky jumpers is a very lucrative niche market in the world of photography and it would make a change from shooting the odd wedding!"

The plane took off and quickly disappered into the clouds. After about ten or fifteen minutes twe saw the first parchutes. First down were the Photographers. They had shot them leaving the plane, caught them in free fall and then had dropped to earth at pace. They landed very fast and in great style, swooping down behind the check in building, over the roof and along the fence in front of us before coming to a running stop about twenty yards from us. All very dramatic.

Then looking up we saw Peanut and Driverman. Peanut had an all pink parachute while Driverman's was pink and grey. I snapped as best as I could and thought Thank God we have paid for the photographer as I really struggled to lock onto her with my focus. In fact I think she will have to do a few more jumps before I get this right! As she came closer they swooped about a bit and it looked fantastic and I briefly caught Peanut grinning from ear to ear. 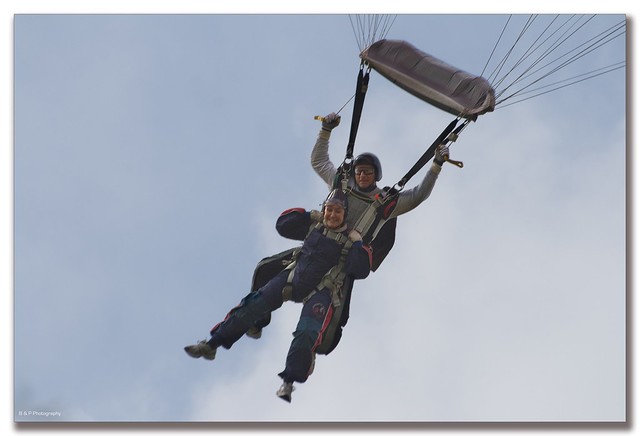 We have had a massive £ 305 in on line donations and we have about £500 in offline donations which we will be busy collectiing this week, so when it is all collected we should have raised over £800 for Cancer Research UK, while Driverman has raised another £400 or so. As soon as it is all collected we will update with the final amount. Click on any of the photos here to see a small slideshow from the day and watch this space for the video of the jump which we hope to have on line about the 12th May!

Thanks to everyone for their donations and well done Lady Peanut and Driverman for your brave efforts - a great distraction for me as I wait around in the mess waiting to be scrambled for my battle on the 16th May! 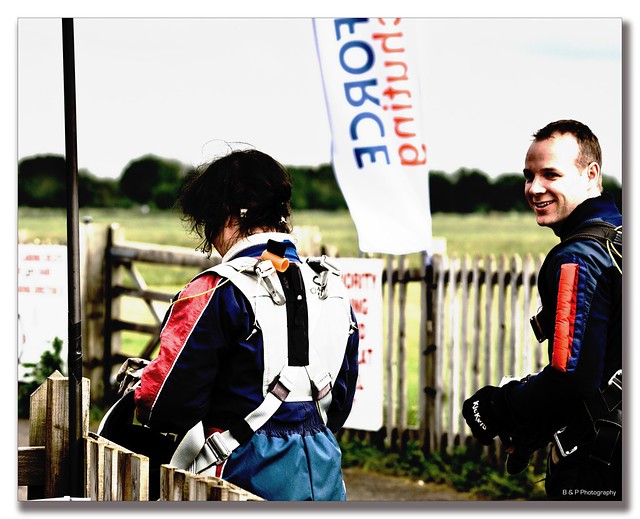 Many thanks for booking a Charity Tandem Skydive with UK Skydiving Adventures Ltd. Please read the following information carefully and bring this confirmation with you to the centre on the day of your jump. If you have any queries concerning your booking, please do not hesitate to call us.

Do not post forms to the centre or UK Skydiving Adventures. Ensure you bring with you on the day.

Registered in England and Wales. Company no 6708098

Next step is to try and book a date and we will do this next week... erm just after pay day. We will book in May but it might have to change depending on the treatment that Mr Beastie is getting around that time.

I will update this blog regularly with news and of course confirmation of the date of the jump as soon as we have it. Finally, once again just to be clear we are paying for the cost of the skyjump ourselves so that 100% of the donations will go to Cancer Research UK.

One day and already we have £95.00 donated! Thanks muchly to everyone who has donated and got the fund off to a flying start!

Today I just want to expand on a few things so you know more of what the plan is.

First, I hope to do the jump sometime in late May, or early June. This is because Beastie should hopefully have had his liver operation and recovered from it by then and will be fit enough to either watch me jump or push me out of the plane! I know this is a long time away but it does have to revolve around Beastie's treatment a bit and it does give me time to hopefully raise a healthy amount for the cause. Worry not though there will be no chickening out of this jump from me!

Secondly, we have amended the first post in this blog to clarify the cost of the sky jump but basically we wanted to make it clear that the cost of the sky jump will be met by us, so that the donations made will 100% go to Cancer Research UK. Mr Beastie felt quite strongly that if I were to do a sky jump, he didn't want all his mates paying for the privilege of me jumping out of a perfectly decent aeroplane! I think what he really meant was that it wouldn't be right for him to buy himself a nice watch while all his mates were paying for me to have a jolly skydive! I always understand his conclusions but rarely understand how he reaches them!

That's all for now but thanks again to all those who have got the fund off to a flying start!

My son - in - law Carl Turner aka DriverMan on Beastmaster.co.uk recently announced that he was going to do a sky dive to raise money for Cancer Research UK and I have decided to follow suit and join him.

My husband Mr Beastie is currently at War with this disease and his battle is logged on his Life Blog. He is facing up to his battles on all fronts, so the least I can do is to offer support from the skies to ensure final victory. Bearing in mind, I am a bit older than Carl, I can't say that a sky dive doesn't scare me, but it is something I have always wanted to do and now it gives me a chance to be proactive in Beastie's fight, which helps me immensely, as all too often as a partner of a loved one fighting this awful war, I can feel helpless and redundant.

I will update this blog regularly with news and of course confirmation of the date of the jump as soon as we have it. Finally, just to be clear we are paying for the cost of the skyjump ourselves so that 100% of the donations will go to Cancer Research UK.