The C70 US Cunningham - Watch Collection 20 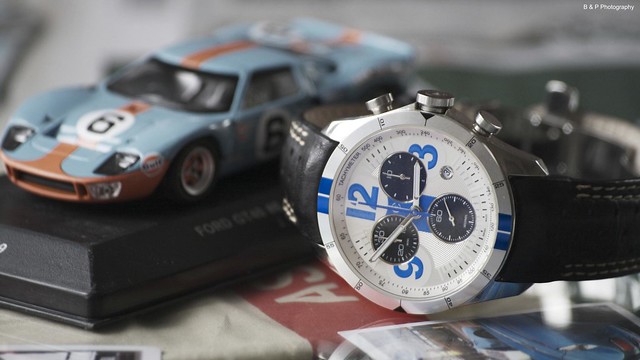 To begin with I got a C70 DBR1. This was a Christopher Ward limited edition of 500 pieces and it followed on from the original C70 series of 6. I had wanted all six of the original set but knew I couldn't afford this and was agonizing over a UK Brooklands or the Italian Rosso Corsa. The DBR1 came along and I went for that. Then Christopher Ward cleared the last few out cheaply so I did pick up the C70 Italian job. They then brought out a C70 Monte Carlo and with a good sale price I could not resist that. Without realising it I had begun to collect the C70 watches. I bid for a few on eBay but was outbid as they were starting to fetch very high prices. I just lost out on a C70 US Cunningham and Jan from the Christopher Ward Forum contacted me. He had not bonded with his C70 Cunningham  so he would sell it if I wanted it.  He wanted it to go to an enthusiast who would give the watch the love it deserves so we agreed a price and today this beauty arrived at the Post Office. Thank you Jan it has been a pleasure to deal with you.

We are big MINI fans in the car world and we have two MINIs, a Clubman and a MINI Coupe and both of these have Cunningham style stripes on, so I am very pleased now to have a watch with these stripes on too.

Tommy Milton drove his Miller 122 to victory in the 1923 Indianapolis 500, which was the first time this legendary race was considered part of the International Grand Prix series. Although the Cunningham racing stripe was not introduced by American, Briggs Swift Cunningham II until much later, as the first ever racing stripe.

It is highly appropriate that it is sported by the C70US as the famous blue parallel lines on white ground have become synonymous with American motor racing. 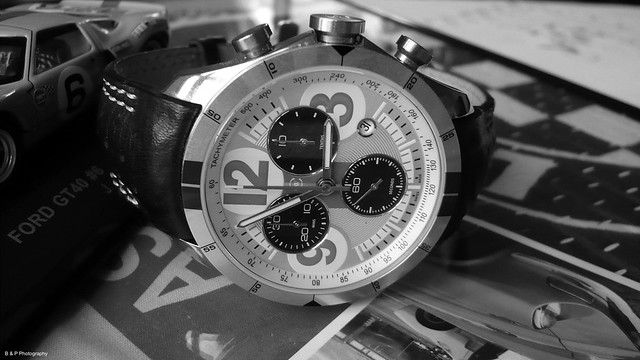 My Mum's brother - Uncle Roy - aware of my passion for watches has given me two of his watches an Omega and this Rolex Precision. It dates from 1961 and comes with original boxes, original guarantee and original receipt. Currently the watch, in gold case with gold case back, is not working so the next step is a service and a clean to breathe new life into this fantastic gift.  Methinks it might be worth a tad more than the original price of Thirty seven pounds five shillings and sixpence!

Oh and for the record the receipt from Watches of Switzerland shows that back in 1961, Uncle Roy got a 7.5% discount on his Rolex!

The watch was my Uncle Roy's 21st birthday present so I feel very proud to be the second owner of this wonderful family watch. Chronology of My Watches

Just for fun I wanted to create a timeline for the watches in my watch collection. 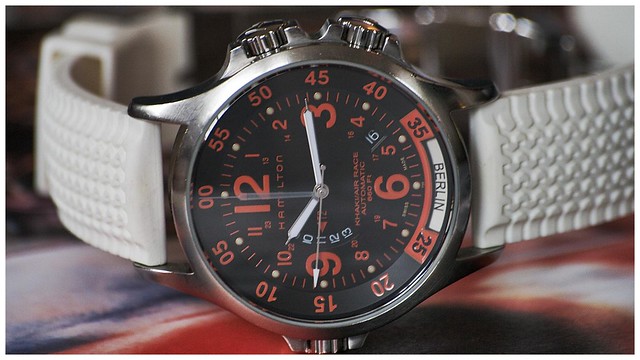 I first saw the Hamilton brand in 2007 at Nice airport while waiting to fly back to England. The watch that caught my eye was the Hamilton Khaki Air Race GMT on a black rubber strap with orange stitching that matched the orange numbers on the black faced dial. The watch was water resistant to 200 metres and came with a decent automatic movement which you could view through the back. It fitted my wrist a treat and was indeed a very tempting watch. When I returned to England I began to look at Hamilton's in earnest and quickly visited their web site www.hamiltonwatch.com.  In the end this resulted in us buying His and Hers Hamilton Venturas and you can read about that here.

The Khaki Air Race GMT never left my mind but the right opportunity never came along, the price kept creeping up and then Hamilton revamped the watch with a new face, which in truth, I did not like as much as the original. It looked like this watch had slipped through the net and perhaps it was not meant to be.

I have half a dozen watches in the collection from the Christopher Ward stable and a consequence of this is that I enjoy a mooch about on an independent forum dedicated to Christopher Ward watches. I know of at least three regulars on this forum who have this Hamilton watch and every now and then they would post pictures of their pride and joy, which would torment me no end. Inevitably I would post on the thread telling the tale of first seeing the watch in Nice Airport and that if ever they wanted to sell to let me know... Well last week My Name is Pete on the forum did just that and so I mailed him straight back asking him how much he wanted for the watch. This is where it gets interesting. Pete is aware of my battle with the Big C through this blog and also because I have mentioned it on the Christopher Ward Forum and indeed he has suffered a very personal loss at the hands of cancer himself, when he lost his wife last year through brain cancer. He went on to suggest not a price but that I make a donation to a cancer charity and he will send me the watch!

I was bowled over by this wonderful idea and immediately put my thinking cap on. I donate every month to Cancer Research already, so after a little think I suggested to Pete that if I donate over the next three months I can actually donate more than by making one larger donation. The deed was done and now I am the proud owner of a watch I have wanted for the last 5 years!

I cannot thank Pete enough for this. Not only have I got a dream watch, but all of the cost has gone to a great cause, personal to both myself and Pete. The charity almost certainly has more money than if Pete had sold it on eBay and donated the money, but more than that, I like to think that Pete knows that the watch has gone to a good home and to a bloke who will know the real value and meaning of this watch every time he uses it to check the time.

I love this watch, I have hankered after it for a very long time, but I cannot explain to you just how much Pete's kindness has made this watch extra special to me! 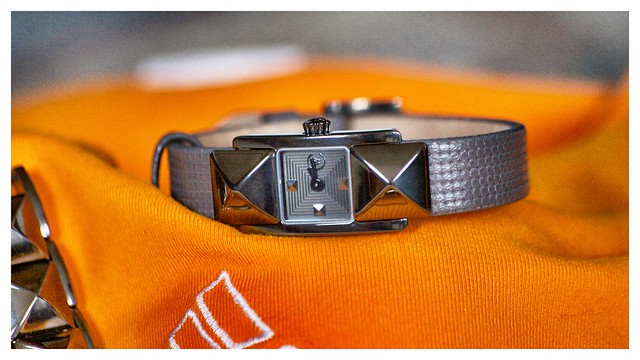 The recent Christopher Ward Sale included some huge discounts on some of his ladies watches and when Mrs Peanut saw the Alex range with 70% off she could not resist. The Alex watch came on a metal bracelet or with a leather strap as above. She decided that the full bracelet would be too similar to her iconic Hamilton Ventura so she went for the anthracite finish on a grey leather strap. For good measure she also bought a matching full metal bracelet.

The honest opinion here is that at full price it was a lot to pay for this watch but in the sale it became a different proposition. We suspect that this was the consensus view as CWL must have had a lot to clear to offer such a large discount. Nonetheless it makes for a different and attractive fashion watch, which means that the search for a tool watch for Mrs P's small wrists goes on. The Hamilton Khaki Lady Officer remains favourite but the price point means it needs some saving up for.

Conclusion: a little cracker from the Christopher Ward sale. 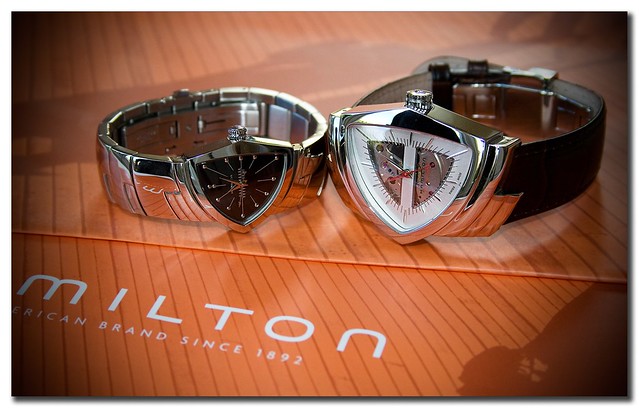 Lady Peanut is not the avid watch collector that I am but recently she bought a second watch a Christopher Ward Alex watch and thus formed a collection. Therefore it is time to add her watches to our Watch Collection stream.

Her first watch then is the iconic Hamilton Ventura as above which forms a matching his and her set with my own Ventura. The story of these purchases can be found here.  Quite simply this is a stunning, stylish watch that looks very unusual. We have never seen anything like it and we both just love it.